An Aria in Venice by KaSonndra Leigh
(A Musical Interlude #1.5)
Publication date: April 22nd 2014
Genres: Contemporary, New Adult, Romance
Synopsis:
**This novel is a standalone with no cliffhanger.**
His goal…One night with the ballerina.
Her goal…To beat the player at his game.
The outcome…Something completely unexpected.Adriana Dostov pegged Luca Martuccio from day one: gorgeous, talented, arrogant, a man who has had difficulty committing to one woman in the past. He is known in fashion circles as the player with a scandalous history. So when the girls in her ballet troupe suggest she gives up her virginity to him, she doesn’t say no. But she’s not sure that a ‘yes’ is the right answer either. Yet, she can’t stop herself from making the offer…a one night stand in Venice.Luca wanted fiesty little Adriana the moment they first met – and he fully intends to have her, hence why he’s agreed to accept her proposal. In the end, he’ll get what he wants. No commitment. All sex.But, as Luca discovers, there’s more to the ballerina with the overbearing mother – and he can’t help but care about the frightened girl behind those sad eyes.Adriana discovers Luca isn’t just walking sex on a stick – he has a wildly passionate side, a lost soul who has suffered just as much grief as her. And it could be, they’re exactly what the other one needs. 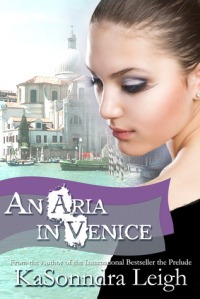 Purchase:
Will be found here come release day:
http://www.amazon.com/KaSonndra-Leigh/e/B0066W7GY4/ref=sr_ntt_srch_lnk_1?qid=1397761014&sr=8-1
AUTHOR BIO
KaSonndra Leigh was born in Charlotte, North Carolina. She now lives in the City of Alchemy and Medicine, North Carolina. She likes to write about people of all ages doing fantastical things in magical worlds. Her two sons have made her promise to write a boy book next.She loves to play CLUE, Monopoly (the Indiana Jones version), and Pandora’s Box (good writer’s block therapy). She lives in an L-shaped house with a garden dedicated to her grandmother. It has a secret library complete with fairies, Venetian plastered walls, and a desk made out of clear blue glass.I’d love to connect with you:
http://www.kasonndraleigh.com/
https://twitter.com/kasonndraleigh
https://www.goodreads.com/author/show/5137209.KaSonndra_Leigh