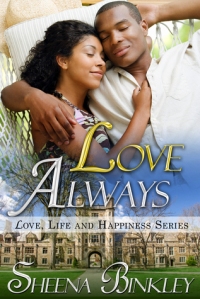 Riana:
From the first moment I’d laid eyes on Shawn Walker, I never thought he would be the love of my life. In the three years we have been together, we have been through so much, and I couldn’t imagine anyone else I would have wanted by my side. Now, we’re about to experience another event that has us both in shock. Will we be able to get through this one together, or will it end up destroying our relationship?

Shawn:
I never thought I would experience love again until Riana Robertson entered my life. The two of us have been through hell and back, but we’re still standing. Now that I’ve graduated Shaw and heading into the real world, I have a lot of responsibility, not just for myself, but for my growing family. With all of the issues surrounding Riana and me, will we slowly lose sight of the love we have for each other, or will it strengthen us as a couple?

I watched as Monica Taylor left with Donnell Patterson and smiled. Those two had been through so much together. From their constant arguing to their various break-ups, they finally were able to talk out their problems and were pretty happy. I knew our friends were still in denial about them staying together, but I had faith in them.  Them deciding to move in together, shows that they’re serious about their relationship lasting.

I glanced over at Shawn Walker, and he smiled. I still couldn’t believe how our relationship had grown. When I first laid eyes on him in our Introduction to Journalism class, I truly despised him. Although I couldn’t deny my attraction to him, his arrogance made me run in the other direction. Well, that, and I didn’t want to fall in love again. But once we were both able to let down our guards, we were able to love each other, which I’m truly happy about.

He wrapped his arms around me and kissed my cheek. “So, what’s your decision?”

My heart started to beat furiously. I didn’t know what to do. A couple of days before Monica made her announcement about moving in with Donnell, Shawn asked me to do the same. He asked after his brother, Marcus, moved out of their apartment to stay in the house their parents gave him; my cousin, Cheryl Thompson, moved in with him. Honestly, I didn’t think it was a great idea; however, since we’re always together, it might not be too bad being with him every day and night.

“Do you really think it’s a great idea? Since Monica moved out and I might, what would Britney do?”

“Don’t worry about me. I’ll be fine,” Britney Lewis interjected as she wrapped an arm around my brother, Jayden. After I told him about potentially moving in with Shawn, he had an uneasy expression on his face. He had one now, while he was staring at me.

“I might try and get my own place. I’ll convince my parents that I need a one-bedroom.”

“You sure your dad will agree?” Jayden asked.

“He might. He’s been pretty easygoing lately, so it’s a possibility.”

“You know my parents. I told them, and they don’t have a problem with it. They know we’re always together anyway.”

“If you don’t want to, just say so. I won’t be disappointed.”

I stared at him and touched his mocha-colored cheek. How could I say no to him? I gazed into his brown eyes, which instantly made me melt. I loved his eyes and could look into them all day and all night.

I caressed his cheek and smiled. “Okay.”

He smiled and kissed me. “When do you want to move in?”

“Soon. The lease is up in a couple of days. I’ll inform the office that Britney and I are not renewing it.”

“Don’t we need at least 30 days to inform them?” Britney inquired.

“We do, but this is a special situation,” I explained.

“If you need to pay the remaining amount in your lease, I’ll cover it,” Shawn offered.

I glanced at him, while Britney raised an eyebrow. “Seriously?”

“Yes. I do have money saved, plus I have money from my internship, so it’s no big deal.”

“Baby, there’s something I needed to ask,” I told Shawn. “Since Marcus was paying for the apartment–,”

I sighed. Maybe this would work out after all. If needed, I would get a job. Since college housing and financial aid paid for the majority of my current apartment, I didn’t have to get one. But since Shawn’s apartment was off-campus and pretty swanky, I figured I would have to; but if he insisted that I wouldn’t need a job, then I wouldn’t worry about it. Not right now, anyway.

“Okay. We can come to campus one day during the break and move everything out.”

He hugged me, and I sighed. Although I was happy about my decision, why did I feel we were getting in over our heads? I knew I shouldn’t think like that, but there was a feeling in the pit of my stomach telling me otherwise. Right now, I’d just have to take things day by day, and hopefully, I wouldn’t have this feeling any more. Besides, what could possibly go wrong between us? We loved each other too much for things to become out of control. And if it did, we’d work through it. We always had and that would never change. 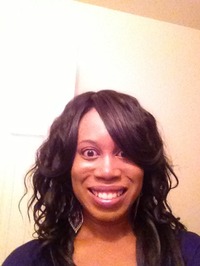 AUTHOR BIO
Sheena Binkley first discovered her love for storytelling when writing her first story for a class project at the tender age of nine. Since then, she has composed several short stories and numerous tales that are not only engaging, but simply entertaining. She is also a freelance writer, penning articles on various topics including education and entertainment. Besides writing, she loves reading, shopping, and spending time with family and friends. She lives in Houston (where the weather is always unpredictable) with her husband and son.Author links:
http://www.goodreads.com/author/show/7092860.Sheena_Binkley
http://sheenabinkley.wordpress.com/
Tweets by ChevonBink

Where did the idea of Love Always come about?

Love Always is the fifth book in the Love, Life, & Happiness series and it’s the second book for one of the couples, Riana & Shawn. The story takes place three years after they met and it shows how much they relationship has evolved. They been through so much in their relationship and now, they have an even bigger test they have to endure. It will show whether their relationship will become stronger or will it destroy them.

With the series, each book was devoted to a couple and their journey to happiness. Why were two books written about Riana and Shawn?

Although I love each of the couples in the series, there were so much more to tell regarding Riana and Shawn. Their relationship is very special and unique that I had to do another story on them. Also, readers of the series love these two and wanted to have an update; so another story was born.

Since this is a part of a series, do you need to read the first four books?

Not necessarily. This story does provide enough background for first-time readers to understand the storyline and the couples; but it would be more beneficial if readers read the first four to see the journey each couple (especially Riana and Shawn) went through to understand where they are now in their relationships.

What was your favorite part in writing Love Always?

I have various scenes that are my favorite with Love Always. In fact, I love the entire story, because it shows how powerful love can be. Also, this book is important to me because it’s has some real-life elements to Riana and Shawn with myself and my husband. Some of the lessons this couple has been through was similar to some of the situations my husband and I faced at their age, so it brought back various memories during my college days a few years ago.

Will there be any other stories coming soon from the series?

Yes, Actually, Love Always was supposed to been the final book in the series, but I couldn’t let these characters go; so I decided to write one more story, titled Redemption. This will be a novella and will be from one of the most hated (but misunderstood) characters from the series, Nathan. Several questions will be answered in this story, so hopefully everyone would understand his point of view on some of the situations that has occurred between him and with several characters.

What are your future plans?

Along with Redemption, I am working on a new series titled Resisting Temptation.  I am also working on a spin-off from the Love, Life, & Happiness titled Simply Love. Both series will be available next year.